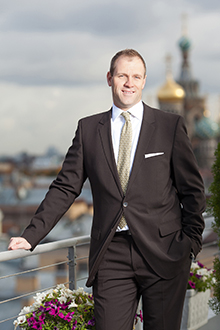 The Honorary Consul of Austria in St Petersburg

«I am very pleased that Austria once again has a permanent presence in Saint Petersburg in the form of an Honorary Consul,» - said Dr. Emil Brix, Austrian Ambassador to the Russian Federation. «Saint Petersburg is a vibrant city combining centuries of history and tradition with innovation and economic growth. Moreover, it is one of the most popular destinations for Austrian tourists in Russia. I am confident that the office of the Honorary Consul will contribute to the efforts of other institutions like the Austrian Library at Saint Petersburg State University or the Austrian Educational Coordinator at the Academy of Postgraduate Pedagogical Education in deepening our bilateral ties with this part of Russia.»

Mr Zaglmann started his career in the international Kempinski Hotel Group in 2002. He worked in seven of the company's hotels around the world before he went to Kempinski Hotel Moika 22 in St Petersburg in 2012. Mr Zaglmann has significant management experience in the hospitality industry and working in many countries with different cultures. He completed his MBA at Reims Management School. He prefers an active lifestyle, visiting theatres and art exhibitions, travelling and playing sports like skiing, golf and tennis. He is married and has a son.